With this Newsletter, we are celebrating the 20th  anniversary of the first Nazareth Conference. Let me take the opportunity to touch the past that has lead us here, the present and the future.

The conferences had created a setting that allowed Germans and Israelis who were – in their different ways as descendants of perpetrators and victims – burdened with the aftermath of the Holocaust, to deal with its legacy and to confront the impact of the atrocities, in the presence of the Other. This gave people a setting to work on the emotional aftermath of the past without being dominated by it – neither by guilt nor by victimhood – through recognizing the other in oneself.

After the deeply mourned loss of Eric Miller in 2002 and Rafael Moses in 2003 – who had been central in setting up the first three conferences – the work continued under directorship of Anton Obholzer on Cyprus, with conferences being addressed to “Germans, Jews and Others” which led to Palestinians appearing in the minds of both conference staff and members. This in turn led to the foundation of PCCA since the founding members had realised that a containing structure was needed to further develop the work.

The foundation of PCCA took place in 2007, when we were planning the first conference with Palestinians on the staff and in the membership. Two such conferences were held on Cyprus, the first directed by Anton Obholzer, the second co-directed by Mira Erlich-Ginor and Fakhry Davids. One of the things we learned during these was that, when a current conflict is being addressed, enactments become even more intense and need to be understood as expression of those emotions which are specially difficult to contain – hence the persistence of the societal conflict. At the same time we began to understand the idea that the Nakba cannot be thought about together with the Holocaust, as an expression of a deep anxiety which is – among other things – most likely impeding the peace process, in the Middle East.

Currently, we are planning another such conference for 2016, with a focus on citizenship, addressed to an international membership beyond Israelis and Palestinians, in which we hope to deepen our understanding of the unconscious dynamics developing within and between groups when a current and often exploding conflict is being addressed as well as the implications of the citizen role, in such contexts.

As we meet Collective Atrocities and their aftermath all around the world, after 2010, PCCA focused on the aftermath of European atrocities and held two “European” conferences in Kliczków / Poland, directed by Shmuel Erlich. These had complex memberships – from UK, NL, Germany, Italy, Poland, Serbia, Kosovo, Israel, US and Canada. They gave members and staff an opportunity to learn more about the difficulties and tensions implied in nationhood, in Europe. Currently, we are thinking about addressing  also other  issues – like migration and xenophobia – in a next European conference since present enmity often is fuelled both by the past and by present societal and economic conflict – not only between, but also within countries, in Europe.

We also planned a more specific European conference dealing with post Word War II effects in Norway and between Norway and Germany, but unfortunately this conference – planned in Norway in June 2014 – did not materialize. We are still reflecting on the experience, whether and how to launch it again, eventually.

Planning for the future

Since my office as chair person of PCCA will end in 2015, I am delighted to announce that Dorothee von Tippelskirch-Eissing has been designated to be elected as successor in the chair, in November this year. From the summer onwards, we shall organise a smooth hand-over to her, so that the work can go on and flourish.

Since my office as chair person of PCCA will end in 2015, I am delighted to announce that Dorothee von Tippelskirch-Eissing has been designated to be elected as successor in the chair, in November this year. From the summer onwards, we shall organise a smooth hand-over to her, so that the work can go on and flourish.

1.Stretching wings – Structure: In terms of organisational structure, PCCA realised that it would like to “stretch its wings”, the guiding idea being that PCCA wants to involve more people who would like to contribute to the various activities which are – or will be – part of our work. Cooperation will be developed in relation to projects which we think of as a number of petals around the centre of a flower: Publications, special activities in countries we haven’t been able to relate to, as yet, theoretical conceptualisations, PR, networking, fundraising and other areas will gradually be conceptualised and taken forward, with PCCA members convening the activities. The graphic model shown below is a tentative design that needs further development, alongside with the activities we take on. 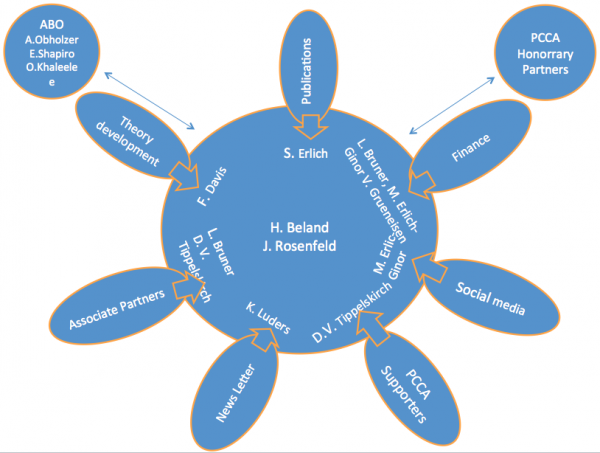 2. Finances: While looking forward to our future plans, we need to also attend to our financial viability. Even though we have continued to follow our guidelines of not making profit, charging the minimal fee possible for conference participation, demanding staff to work on almost voluntary basis, making sure that bursaries can be given to those who would like to attend, but cannot afford it – our wish to extend our work to a variety of activities will also need financial resources which we do not have.

We know that many readers of our Newsletter are supporting our work in many ways. This is to ask also for a financial contribution to enable us to launch the next conference which is conceptualised to be both international and also address the Israeli Palestinian conflict.

Donations are tax-deductible since PCCA is a registered charity.*

Last  not least: We are most grateful to all those who have supported our work so far – be it as members attending or by spreading the news about our work among those who might be interested. Without your support our work and its development would not have been possible. Also, we are deeply grateful to the Israeli Psychoanalytic Society, the German Psychoanalytic Association and the German Psychoanalytic Society who have been generous and faithful sponsors of our work throughout 20 years. This has allowed us – until today – to give bursaries to people who wanted to attend, but could not afford the full fee. Also OFEK, the Tavistock Institute London, the IPA, the Arab Psychological Association and the Polish Psychoanalytic Society have helped with making our information available to members and / or clients.
Thank you very much!
With my best Seasonal Wishes –